Ever wondered what the benefits are to streaming your Conference to those who can’t physically attend?

Over 17 million people watched with Wimbledon final in 2013, whilst around 400,000 attended in person. 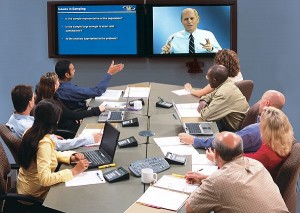 The event was first televised in 1937, it is possible that back in those early days people worried that no one would come to the tournament in person if they could watch from the comfort of their favourite armchair. It’s an interesting analogy because many event organisers still worry about streaming their events and haven’t made the leap of imagination to thinking about their event in broadcast terms. But if you think how many huge, live events are televised and how tickets to be there in person still sell out, then you have your answer to the burning question of whether making something available online will be detrimental to ‘bums on seats’. It’s highly unlikely because it’s an entirely different proposition. Streaming or broadcasting your event should be seen as a massive opportunity or a marketing activity at the very least.

There’s something about a live event that people respond to – and that’s what should be taken advantage of. The live stream should be a big advert for next year’s event. It’s a wonderful way to engage people whilst all the twitter activity is happening. Letting people have a look at what’s happening and what people are tweeting about will incentivise them to go in person the next time. Streaming doesn’t cost too much extra and it allows the opportunity to capture people’s attention and leverage the buzz.” 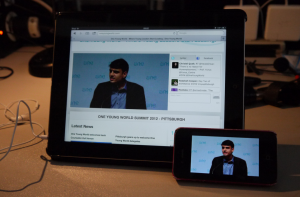 People attend live events to soak up the atmosphere, be close to other humans or maybe just get a day out of the office. The reason so many live events happen is because they focus attention on an industry, issue or product at a particular point in time: they draw people together and create a timely buzz. People will always want to attend great events in person if they can. But others may only have time to tune in for an hour or catch up on a session of specific interest. If they can see a stream, live image uploads and a twitter conversation, people may well be influenced to attend in person next time. There is mounting evidence that this is the case. The Virtual Edge Institute survey said that 82% of the online audience found the virtual environment helpful in making a decision to attend in-person next time.

A US survey highlighted that 20% of event organisers are using an online and/or hybrid event solution as a tactic for attracting and retaining more [in person] attendees Companies have started adding different virtual offerings to their annual meetings with the  virtual element having no negative impact on the physical attendance.

An example is a case study about a very traditional conference, which ‘went virtual’ out of necessity. During the eruption of Eyjafjallajökull in 2010 a conference had 150 booked delegates, supposed to be attending in person, but due to the volcanic activity, the conference was turned into a ‘hybrid’ event at the last minute, using live streaming and chat rooms to connect people globally. By the end of the three-day event, 1706 people had attended online, the conference has now grown both physical and online attendees year on year.

Research shows that up to 18% of virtual participants buy the ticket next year. When people live stream, the audience spends three times longer on the site and the event goes twice as viral.

The events industry, like most others, is facing major changes, and digital business models will have a big impact on financial as well as environmental sustainability. In fact, they generate more value by packaging up the content for on-demand viewing and generating leads by asking people to register or even pay to access their archives of specialist content. Just as new broadcast technology offers more access, interaction and flexibility for viewers of events like Wimbledon, streaming and virtual event technology offers huge opportunities, and this is just the tip of the iceberg.

Taken from: Why streaming an event doesn’t stop visitors from attending in person – by Sarah Platt of @kinura

Please enter the Page ID of the Facebook feed you'd like to display. You can do this in either the Custom Facebook Feed plugin settings or in the shortcode itself. For example, [custom-facebook-feed id=YOUR_PAGE_ID_HERE].